The Brazos River in Richmond is at Gage Elevation 11.69 feet. We have rain chances through Thursday with temperatures gradually climbing into the weekend. The end of the week and weekend will depend on Grace’s final path and development. At this time, Grace is anticipated to continue moving in a more westerly direction, possible moving into Mexico, south of Brownsville, over the weekend. Although Grace is currently not expected to impact southeast Texas, as with any storms moving through the Gulf, residents are encouraged to watch for changes in the forecasts and stay up to date through you preferred source (i.e. National Weather Service, Space City Weather, and Local News).

The 7-Day Quantitative Precipitation Forecast (QPF) is showing the lower Brazos River Watershed receiving between ¼ inch and 1 ¼ of rain over the next 7 days. Based on the current forecast, no flooding due to the Brazos River through Fort Bend County is anticipated.

The National Hurricane Center is continuing to track Fred, Grace, and Tropical Depression No. 8. At this time, none of these storms are predicted to impact southeast Texas, but we are continuing to watch Grace.  Below is an August 16 summary from HCFCD on TS Grace:

The weaker and disorganized system continues to track south of both the forecast track and model guidance 24 hours ago. Strong deep layer ridging north of Grace will continue a westward motion with the system passing near or just north of Jamaica and then south of Cuba over the next 48 hours. Since it now appears that Grace will largely miss most of the Caribbean Islands, it is unlikely that Grace will dissipate. Global and hurricane guidance aides have been trending southward over the last 24 hours in response to a weaker Grace and also the westward expansion of a strong deep layer ridge along the US Gulf coast late this week into this weekend. Nearly all of the guidance keeps Grace moving almost due west into the southern Gulf of Mexico by late this week and then into the SW or W Gulf of Mexico by Friday or Saturday. The CMC is a northern outlier right now showing a threat to southern TX late this week. The NHC track is just north of the multi model consensus and some additional south adjustments will likely be needed to the track over the next 24 hours.

While there is building model consensus that Grace will generally remain well south of the upper TX coast, it is important to monitor forecasts for any changes especially since the current state of the system is disorganized and a new or better defined center could form.

While Grace is not directly moving over the islands of the Greater Antilles, the circulation is being impacted by the higher nearby mountains. Intensity guidance does little with Grace for the next 48 hours, even as the system moves over the warm waters of the NW Caribbean Sea. However, once in the southern Gulf of Mexico the hurricane models show significant intensification of Grace and the latest run of the GFS has followed that direction also. Several of the CMC and GFS ensembles show intensification into a hurricane over the SW/W Gulf of Mexico as Grace nears the Mexican coast. Given seemingly favorable upper level and sea surface conditions along the path of Grace over the southern Gulf tends to support some of the stronger solutions and tropical systems in this area of the Gulf tend to have a history of quick development. NHC is currently indicating Grace nearing the Mexican coast as a tropical storm, but a hurricane is certainly possible.

No direct impacts of Grace are currently expected on the upper TX coast, however depending on the size of the wind field once in the Gulf of Mexico, some large swells and higher coastal tides may be possible. Greater impacts with squalls and higher seas appears more likely along the lower TX coast into the weekend.

As always with tropical systems, check forecasts frequently for changes. 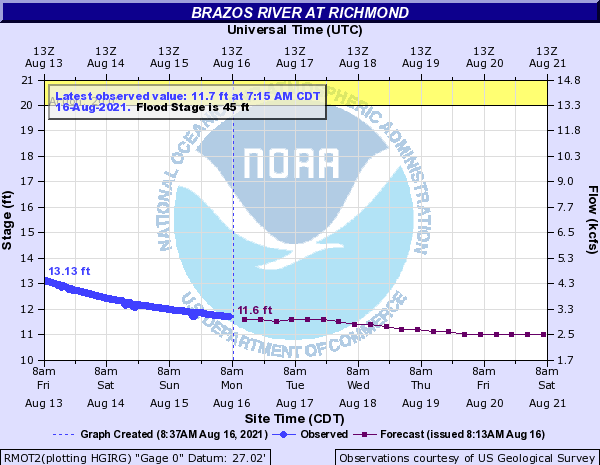